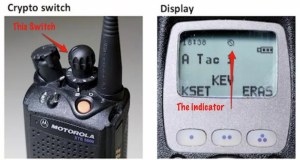 I’ve been building software/internet products for a long time now and always cared a great deal about User Experience and design. Good UI can get your users more engaged, can lead to higher conversion rates, better engagement and overall better user experience. But did you ever think that good UI can make your product safe?

I was watching this TED video today where Avi Rubin, a security expert, explains how everything (from your car to your Pacemaker) can be hacked.  It was all very interesting but what I found fascinating was his example about hacking the two way radios that are used by law enforcement officials. These devices, made by Motorola (not known for employing the best in UX…), have an option to encrypt radio transmissions  with a switch of a button.  As you can see from this image, moving from open air to a secure channel requires 1/8 turn of a multi-purpose switch. When secure, the device is showing an indicator which is few pixels large. Because of this failed UI, 20% of the discussions in the secure channels that were sampled, actually happen in open air.

The hackers didn’t even bother to unscramble the channels. All they had to do was to listen to the channels that were meant to be encrypted and wait for the officer to fall into this UI trap. With that, all they needed was a  scanner that allowed the hack.

Imagine all the engineering years that went into creating the most elaborate encryption code that went to waste because of bad UI. I am mostly convinced that good UI was not on the list of the buyers when they decided on the device they will buy. Larger companies both building or buying products should learn what consumer internet startups know for years- design matters as much as good engineering.

When bad UI can make your product unsafe

One thought on “When bad UI can make your product unsafe”