Both Sarah Lacy and the New York Times covered the story of Apple iPhone manufacturing in China. The short of it is simple: companies don’t go to China because of cost anymore, but rather because a Chinese company provides better flexibility and higher quality than an American one. The days of cheap plastic chairs manufacturing in China are over- they outsource it to Vietnam now… Today’s China makes the most sophisticated devices in the world.

But why China wins? I believe that China is winning because it got to an optimum between education, wealth, human rights and discipline. It seems like the formula to a national success is MIN (human rights, wealth) and MAX (education, discipline). 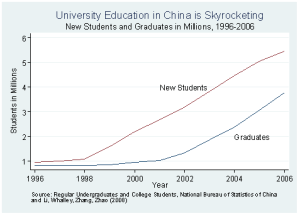 20 years ago, China didn’t have enough educated professionals: the country was poor but people were very disciplined and the government disregarded their basic rights. This is a great climate for  massive projects like building highways or railways : few skilled engineers and thousands of hard workers, working for pennies, 16 hours a day. Today, these projects are the base for China’s growing economy.   But China didn’t stop there: the government (yes Ron Paul, the government) is making an enormous investment in education and sees steep increases in high school and higher education. Now, armed with employees that are as motivated and discipline, but also well educated, China can compete and win the most sophisticated manufacturing projects in the world. Yes, they run the risk of any other fast growing economy- with more wealth comes less discipline and motivation (try to wake up 8000 American workers at midnight and send them to their work stations just because someone changed a design in Cupertino…) but China is many years away from this prosperity level and you can rely on the Chinese government to keep its people disciplined for years to come.

What can we do? admit that we are wealthy and lazy. We will not win over China by being harder working or more disciplined or strip our people from their basic rights. We can only win (or at least give a good fight) by out investing China in education. After all, our starting point is so much higher and if we act fast enough we can open a big enough gap. Highly educated and innovative people can be lazy: most innovation in the world happens because a smart person wanted to work less. You just can’t be lazy and not educated. This is where Greece is. And no one wants to be Greece right now.

So let’s stop pretending that we can bring back manufacturing jobs to this country by waving our hands and changing the laws. We can’t. Not now. We can super charge our education system today so we can benefit from this investment 10 and 20 years from now. The economic battle with China is going on for over 20 years now. China has the patience and a plan, and we talk and complain. Guess who’s going to win this fight?